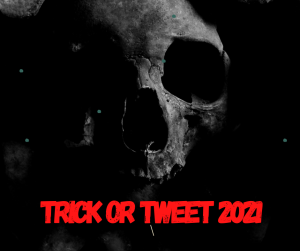 Trick or Tweet 2021 is a simple exercise. Everyday in October, writers will create a tweet-sized story. Gabino Iglesias (who wrote Coyote Songs, which you should read) came up with the idea, and Villimey Mist (who wrote The Nocturnal Series, which you should read) created a prompt for each day! This has been super fun, and below are the tweets I came up with for each day. The prompts are hash-tagged in each one!

10.1
Can you believe he’s been gone 20 years? My life has been quiet and beautiful since then, but every year I find a medium, a truly gifted one. So that every year I can remind him that it was me, and that they’ll never find the places I hid him. #trickortweet2021 #seance

10.2
Preparations began before death.
They marvel at my heart beating in a desiccated husk.
In a thousand years I’ll still be here,
while they’ll be dust.
#trickortweet2021 #mummified

10.3
They say I’m dead, no heartbeat and no pulse. I’d be inclined to agree but I’m thinking, I’m aware! They’ve dressed me in my finest and put me in a cardboard casket. I can hear, I can see, I just hope I can’t feel. #trickortweet2021 #crematorium

10.4
I’ve been given the Hex, with the unlikely words ready to lure him, and break him. Planted in a newspaper of all places, ready for his eyes. The words that will leave him vulnerable to the horrors I have planned.
If you like piña coladas…
#trickortweet2021 #hex

10.5
They needed to defend their woods, so his father coming home masked and bloodied wasn’t unusual. But this time, he could barely stand.
“She’s not like the others, son.”
He pulled off his #mask and tossed it to the boy before collapsing.
“It’s up to you now.”
#trickortweet2021

10.6
The scarecrow raised the #pitchfork and stopped suddenly. She wondered if this monster they accidently awakened was contemplating mercy. He was. Having paused to take aim, he shoved the pitchfork into the center mass, ensuring her family an open-casket funeral. #trickortweet2021

10.7
I heard your prayers, your inconsolable sadness. I heard and I fought my way back to see you, to tell you I miss you too. But you screamed when you saw me, and hid your head. I can’t go back, and I watch you move on from the shadows. You made a #wraith of me. #trickortweet2021

10.8
I got you back. It took years, planning and scheming, but I paid you back ten-fold for all of it. Truly, it was exquisite. But now, what is this emptiness? Why has all this effort left me with so little?
Oh.
This must be your revenge.
#trickortweet2021 #revenge

10.9
The Crone never reveals her name, but asks the sobbing man again if he understands.
“Yes, it doesn’t matter what happens to me, if you can help her.”
She again reminds him there is always a heavy price when dealing with gods who actually answer prayers. #trickortweet2021 #occult

10.10
He wonders how they see the devil in everything that helps him escape, his clothes and music, movies and books. But they’re cannot see the devil in the youth pastor with the lingering eyes and sweaty hands, who makes him stay behind after each service. #trickortweet2021 #satanic

10.11
You’ll find the grave far beyond the cemetery fence, deep in the trees. A mound of stone and concrete heaped upon it, the bent ends of rebar jutting up from it. A simple epitaph on the gravestone:
Here it lies, and God help us here it will stay.
#epitaph #trickortweet2021

10.12
Every year, his parents “check” his Halloween #candy and abscond with the best ones. This year, Kyle stops a block from his house, and injects a little from the syringe into the choicest pieces. Not this year, he thinks. Not this year, and not ever again. #trickortweet2021

10.13
He kept the skulls of those he lost on a shelf so they’d be close always. He hoped to join them there. When I found him cold I made sure he would. Fire ants did most the work. I placed his #skull with theirs, and locked the door behind me. #trickortweet2021

10.14
There are a lot of ways to sever communication. But in my experience going through the jugular is the most effective. #severed #trickortweet2021

10.15
The old man examined his face in the mirror and chuckled. “I look positively #eldritch, my dear.”
His wife laughed. “You need a vacation. Florida? New Mexico? R’lyeh?”
Age will take until nothing remains. But for the fortunate, laughter is the last to go. #trickortweet2021

10.16
“Let’s go to the #freakshow cemetery!” They laughed, driving to Showmen’s Rest. But they only found tombstones with flowers, and felt judging eyes from the dark. The drive home was silent. #trickortweet2021

10.17
“How could they compare him to the devil?” Wondered the masked man swinging the hatchet, hacking his way through the summer camp staff. These weren’t murders, they were executions. Because the good book said none were righteous. No, not one. #trickortweet2021 #execution

10.18
His mom insisted he attend the Halloween party. He didn’t know anyone. They passed around a box with witch eyes inside, but there was a #bite when he put his hand in. Searing pain. Screaming. Where did the people go? How did it get so dark? Why won’t it let go? #trickortweet2021

10.19
I’m under the house, strewn among cobwebs and stone. Every new tenant is a chance to be discovered, but I remain. Less of me every year. This couple is really tearing into the house. Dare I hope for discovery? Dare I hope for peace at long last? #trickortweet2021 #cobwebs

10.20
He only wanted to see them laugh, because when he needed it, one made him laugh. But instead he saw terror in their eyes. Mr. Chuckles had enough. With floppy shoes, assorted knives, and a smile, he vowed to make everyone who made kids fear #clowns suffer. #trickortweet2021

10.21
The town council said the sinkholes were natural, nothing to worry about. Then why did they form so quickly and in such ornate patterns? Why did he find his doors jammed shut from the outside, and what was scraping against the floorboards? #trickortweet2021 #holes

10.22
#fear motivated everything. Even when he chased them, he hoped they would just leave. But when the final girl stood over him, turning his weapon on him, he was not afraid and smiled under his mask. After all these years, nothing else could happen to him. #trickortweet2021

10.23
You’re telling me a funny story from my childhood, asking me to remember, so I can laugh too. But those memories are hidden among a labyrinth, one I don’t like to enter. There are monsters down there. #trickortweet2021 #labyrinth

10.24
He didn’t know why the #undead said his name. It was the only thing they ever said. Which is why the town left him, ankles broken and chained to a flagpole. He can hear them now, shambling and crawling to him, saying nothing but his name. #trickortweet2021

10.25
Big cats skulking on the #moors are supposed to be legend. And legends just are stories right? That’s what Annie keeps telling herself, as she wanders the fields looking for her toddler, and catches sight of the paw prints in the earth, and the tiny drop of red. #trickortweet2021

He followed the woman from the #carnival to her trailer. She had something to show him. He was busy unbuttoning his shirt when she pointed to the corpse on the bed. It was him. Another him with a knife slid between the ribs.
“I find you in every town we visit.” #trickortweet2021

I rip out a tooth, put another in the socket. The new ones taken from the bear skull I found in the woods. Give it time, and these #teeth become my own. I’m keeping an eye on the ones I picked, their comings and goings. Almost ready now. Almost ready. #trickortweet2021

I don’t know why I’m driving. When it hits it doesn’t matter where we are. My son wakes up and asks.
“Where are we going?”
“#Oblivion,” I say.
“Oh. I like going places with you, dad.”
I turn to him, and behind his smiling face I see fire on the horizon.
#trickortweet2021

He looks out the window at the old house.
“You heard the doctor, mother. I don’t have long. She’s helped so much at the motel. She can #hide you, hide us! She just needs convincing. Wait, that’s her.”
A knock on the door.
“You wanted to see me, Mr. Bates?”
#tricktweet2021
10.30
It starts with the #jackolantern. You didn’t carve it. You certainly didn’t light it. But it’s on your porch and it always returns. It’s a beacon. Lock your doors. Board the windows. Listen for the scratches under the floor. Happy Halloween! #trickortweet2021

Your town celebrated Halloween early. Can’t have kids #trick or treating a school night. So on the holiest of days, you extinguished your jack-o-lanterns and put away your offerings and effigies. Now there’s a knock, and no hope for you. All gods hate a heretic. #trickortweet2021