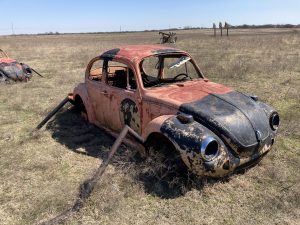 Blog Number Two! It’s going to be a thing now, this blogging. Today, I’m talking about roadside folk art in Saint Jo, TX, stories of Bigfoot in Robbers Cave State Park in Oklahoma, and I’m going to reveal the cover of my in-progress Halloween novella! 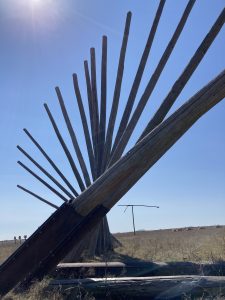 As with most things I do, this started with looking up local towns on Roadside America. I found out about the Running N Ranch in Saint Jo, just outside of Gainesville on FM 677. Rancher Earl Nunneley started created massive sculptures that people could stop and see, including Volkswagen Beetles turned into ladybugs, a massive sculpture out of 14 telephone poles, each one 35 feet in height, and daisies made from airplane engine parts. 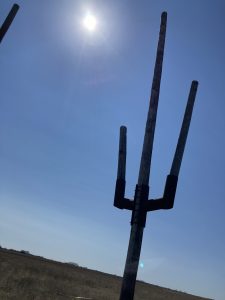 Earl passed away in 2007 and started his art project simply to have something to do. As he told the authors of Weird Texas in 2005: “It’s just a conversation piece… Whenever I semi-retired, I just didn’t have enough to do.”

As soon as we pulled up, a truck parked next to us. A woman got out and introduced herself as the artist’s daughter. She pointed out that several of her father’s creations are aligned with the spring and winter equinoxes, and told us we were free to wander the grounds. We just had to close the gate behind us to keep the cows from escaping. 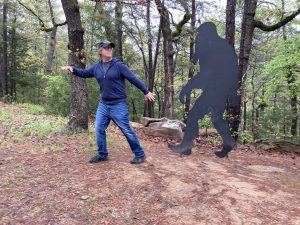 In Oklahoma, there is a beautiful state park called Robber’s Cave. A former hideout for outlaws, the park is a picturesque place decorated with metal cut outs of the animals one might encounter, including bobcats, bears, and sasquatch. When I visited to general store in the park with my family, I asked the employees about the cut outs and if people ever claimed to see Bigfoot.

They let me know the latest sighting took place at Group Site B, with something big walking around a tent. Unfortunately, this was nowhere near our campsite. My favorite anecdote was this:

“The one thing that always made me think ‘well maybe’ was when this boy came in really early. He said he was leaving one day into a four-day campout. He didn’t want a refund or nothing, he just wanted to leave, but he had to tell us there was something big in the park. He said it stood on two legs and started rocking his camper, almost turning it over. He said he knew what bears looked like, and it wasn’t a bear.”

I asked if they had ever seen one, or if they would want to. The answer was ‘no’ to both. But!

“I’ve always wanted to see a bear. I’ve worked here for 14 years and I know there are bears here, but I’ve never seen one.”

Of course, I made my children take pictures of me with the cut outs. They were rewarded with s’mores. 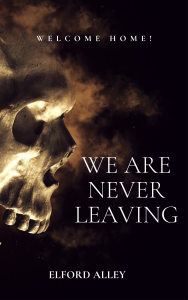 So, my Halloween project is a novella called We’re Never Leaving, about a family that moves into a haunted house and refuses, absolutely refuses, to ever leave. They then mount an offensive based on everything pop culture has taught them about ghosts and hauntings. However, the family soon finds out that there is a very good reason the specters are trying to make them leave. Here’s the cover! I will also be pairing it with a few short stories.